Xiaomi has just unveiled Mi Note 2 at a Beijing press event, that has striking resemblance from front to Samsung’s ill-fated Galaxy Note 7, thanks to the curved edges of its screen and similar kind of home button. This seems to be the second non-Samsung devices to feature an “edge” screen, first one was Huawei’s Mate 9 (which is still unannounced). 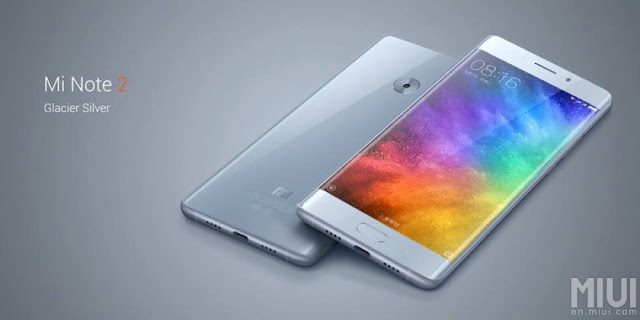 The Note 7 resemblance extends to the rounded fingerprint sensor, which appears to be embedded beneath the glass, just like on the recently announced Xiaomi Mi 5s and Mi 5s Plus. The glass back of the Mi Note 2 is also curved, creating an eye-pleasing symmetrical design that converges into a metallic frame. 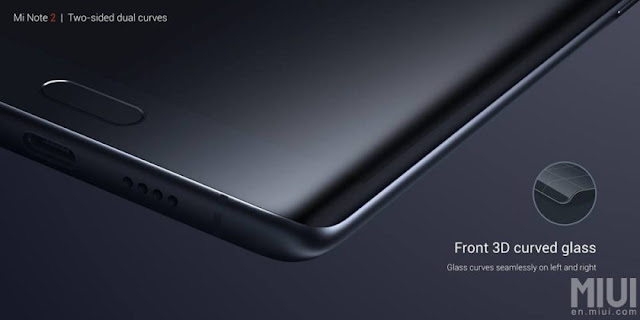 The display of the Mi Note 2 is a 5.7-inch Quad HD OLED panel. This is likely the flexible display that leaked a few days ago, but you obviously won’t get to flex it, because it’s encapsulated in glass. Taking the curved edges into account, the Note 2’s screen to body ratio is 77.2%, a figure that’s held down by the sizeable top and bottom bezels. 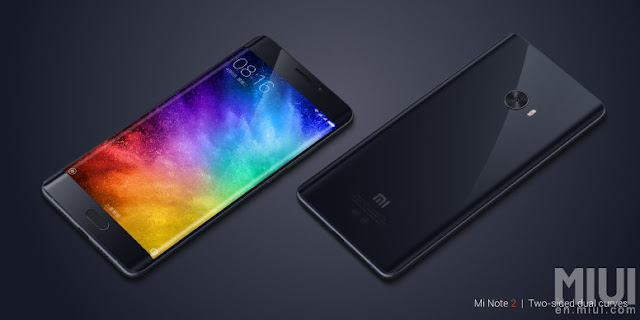 Like other recent Xiaomi flagships, the Mi Note 2’s spec sheet is quite impressive. You get Snapdragon 821, the latest processor from Qualcomm, coupled with 4GB or 6GB of RAM and 64 or 128GB of flash storage (UFS 2.0) space. Powering everything is a beefy 4,070-mAh battery with Quick Charge 3.0. Audiophiles will want to hear about the Acoustic audio processor, which offers 192KHz/24-bit Hi-Fi sound. 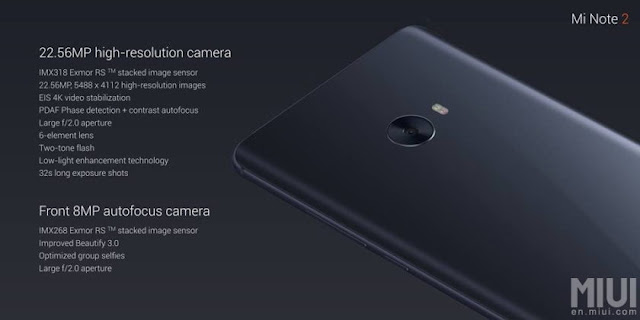 The rear camera boasts a whopping 22.56MP IMX 318 sensor from Sony, featuring electronic image stabilization (but not OIS) and hybrid (phase detection and contrast) autofocus, while the selfie camera is a f 2.0 8MP IMX 268. Xiaomi says the Note 2 features global LTE support for a total of 37 LTE bands supported. As usual, Xiaomi is keeping the price of the Mi Note 2 at a very decent level, at least in China.